Without a shadow of a doubt working with Jazzy Jay has opened some doors for me, especially when it comes to the crew DITC. Over the last 5 years I had built a friendship and relationship with one of my all time idols Diamond D.

Going back to the release of his first solo album. Like many people I was totally blown away from the amazing music and his rhymes. It was an album that fully embodied and represented this Music we call Hip Hop, not only did it capture its time but it gone on to stand the test of time to be known as one of the greatest Hip Hop albums of all time. It became the benchmark for all aspiring producers to one-day reach.

I was one of those aspiring digging in the crates every week producers. I was in a crew made up of me and Mike Richards called ‘the Butcher Shop’. Birmingham City Legend DJ Sparra, former DMC champion, was mentoring me. He was part of a crew called Rerun. Their lead MC was known as Juice, Juice Aleem as most people know him. Leaving Sparra’s home we was discussing Diamond D, 1992 Album ‘ Stunts Blunts and Hip Hop’. This is where I want to be I said, unless I’m this good I cannot put a record out.

Fast forwarding some 18 years later. In which over that time I become more known for film making and documenting this culture. I got to meet Diamond in London. Although our meeting was brief, Diamond become familiar with my work and what I represented.   This lead to me shooting a few things with him that maybe in the near future we will put out in the public domain. A couple DJ sets beautifully shot.

Diamond then took part in my upcoming film ‘Looking for the Perfect Beat’. Whilst I was shooting the movie, I had painted a portrait of my NYC father Jazzy Jay that Diamond had seen. He liked it and wanted a painting by me for maybe a future record release. Returning back to the UK, I got busy editing the film. Then Diamond announced he was working on his new album, and there was opening for someone to do the album cover. I submitted some artwork, which got selected, leading to Cover artwork of his 2014/15 album THE DIAM PIECE.

Returning back to NYC to try complete filming my project past November 2014 Diamond asked me if I had time to shoot something for him. He asked if I could do something for the track featuring one of the greatest punch line M.C’s Granddaddy I.U. ‘THE GAME’ personally my favorite track on the album had fallen at my feet. For it production value I love the open space D created, the drums are not hard but lyrics, cadence and voice of DADDY I.U give it all the power it needs to be a very big sounding track.

The evening before the shoot, we all coincidentally met at the 41st Zulu Nation Anniversary held in Harlem.   Along side Daddy I.U, Black Rob, Minnesota , Fred Beanz and Break Beat Lou. Diamond informed me that he had booked out a bar for the shoot and that was to meet 3pm in the Bronx.

The following day joined by Fred Beanz and Breakbeat Lou we met up in the Bronx for the shoot. We had got there before Diamond and crew and arrived at the venue. THE LEGACY BAR where we was met by the owner who was an fantastic host and went out of his way to help and support the shoot.

In classic me style I recruited Fred Beanz to assist me with the shoot and gave him about 10 mins training. Hence his 3 times cameo appearances, a thank you for his efforts and sorry for dropping you in it on my part.

Let take into account that we started the shoot at 3 pm and NYC gets very Dark early that time of year. Time was very limited. To a certain extent Diamond gave me some freedom to try a few things. Some worked some didn’t. Anyhow as a back up plan I met up with I.U to shoot some out door shot very very early one morning.

Returning back to the UK I had done a rough of the video I think the first week I got back. Unfortunately some things happened and I was out the picture until the start of this year. The whole week alongside Diamond we worked together fine tuning this video.

So for all those that have a passion for things creative, keep doing what you do, never give up your dreams or goals, patience is a virtue. Even when things get tough things can happen. Karma.

Whilst in New York last November working on the film I found the time to shoot a video for my friends Johnny Juice’s new project HiCoup.

HiCoup in his own right has been on the circuit for a good while.  I had never met him before the shoot.  I had only heard the E.P that Juice produced.  It’s a fantastic project led by Johnny Juice a accomplished producer and DJ.  Seeing him at work in person I can say that he is no way a beat maker, who churns out track after track asking artists to pick one.  He carefully selects who he works with and grinds in the studio to help develop a sound and artist.  His way is by no means a 1hour take.

There was a song on the E.P that stood out called ‘Crocodile Tears’.  I had spoken to Juice prior to leaving out to NYC and said if there was time Id shoot something for him.  I had been in NYC 2 weeks.  This was my final day.  I still have people to shoot for my project.

The sun was light very bright first thing in the morning, the weather was turning so there was a really nice frost.  Knowing how long things take I suggested to Juice we can shoot 6am in Brooklyn’s Forte Green.  I had shot there earlier on my trip.

HiCoup and manager where based in New Jersey.  I was very surprised when they called me to say there were at my spot dead on time.  We headed out to Forte Green and knocked out the video before 8am.  Only if every shoot could go down as well planned as that.

I had completed the video the first day I arrived back.  Now that HiCoup has approved and posted the video onto Youtube I can post it onto my page, enjoy. 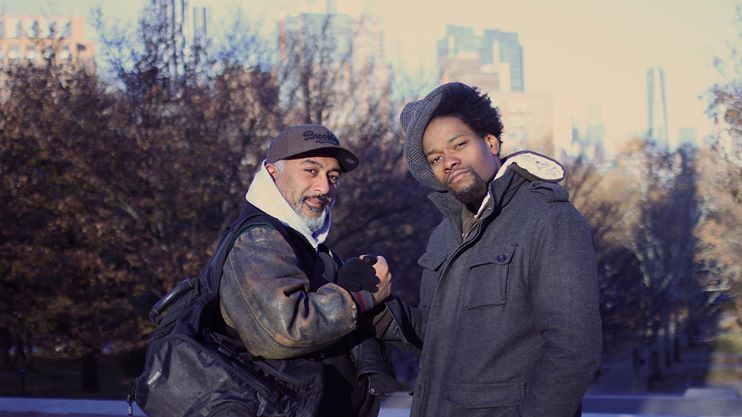