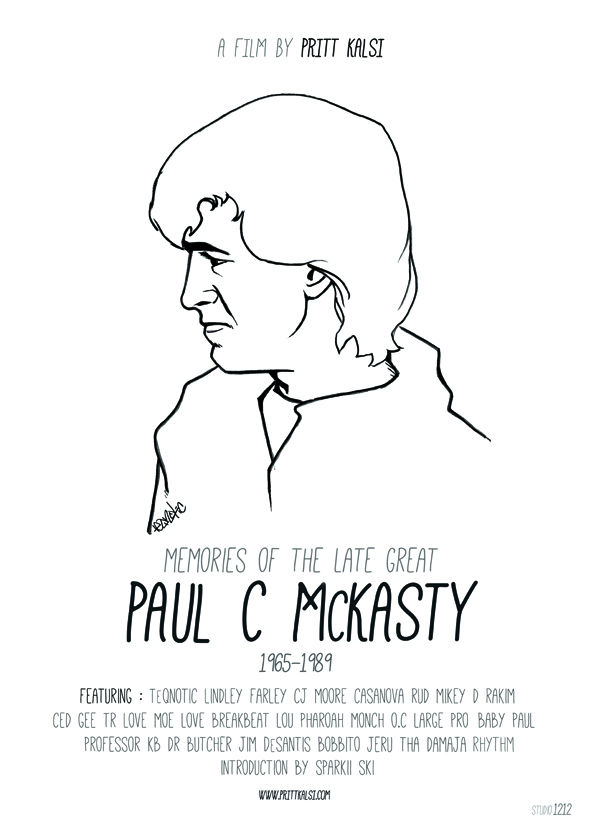 Those that know about me of have read through my Blog will know that I’m unfunded film maker.  In 1997 I started working on my project ‘The Men & Their Music’.   The Paul C film started out as a chapter of that, manifesting into its own project.

TeQnotic and I worked together on this project creating a poster fitting for the film.  I played the role of Art Director, TeQnotic the artist.  Here is your chance to own 1 of 50 limited Edition Posters signed by myself the director of the film.  As a thank you gift to those that supported the project, took part in the project, members of Paul’s Family I am trying to raise the funds to get posters printed and shipped to them.

This is a one of chance to own a copy of the poster never to be reprinted.  If you watched the film and would like to support real independent film making, please feel free to show your support.

Here is the Third and final part of the film about Queens Legendary Producer and Engineer Paul C McKasty.  A man that contributed a great deal to the Golden Era of Hip Hop Music.  As in the Article on the previous Post this is no way the definitive story or Film.  There is still a few key people missing.

I hope that after watching this that they may want to contribute some footage that would make it the definitive film.  I would really like to thank all those that took part and believed in me from the get go.  Lindley Farley and CJ Moore who where the driving force behind me who’s words in previous conversations I cherished and kept in my heart and soul, this film as I always said is a film made for you.

Along the road I have now collected over a 1000 hours of Hip Hop footage and interviews.   If I could I would love to make a film on the following, the offer is there. Marley Marl, Large Pro, Diamond D, Johnny Juice and my mentor and big Brother Jazzy Jay.  A more personal look at the men ‘The Men and their Music’.

Thank you to all the people who have been contacting me with their thoughts about the film, Rhythm from the group Phase and Rhythm who after watching Part 1 & 2 contacted me and withing a day shot and sent me a piece to be added to the film. If Large Pro, Rhazel and Biz after seeing this would like to contribute some footage please get in touch.  Thanks to Stezo and Cool V who have agreed to send some footage.

Monday I will be dropping a video -Behind the making of the ‘Memories of Paul C McKasty Poster’.  Art created by Paul C’s High school friend TeQnotic.

This is by all means not the definitive documentary or story of Paul C McKasty.  The Legendary producer from Queens NYC who had his life cut short aged only 24 years old.  This is a film put together from a footage I had accumulated from 2000 to April 2013.

Friends, Family and Fellow artists share some personal stories of their time with the man.  I am as you may know a record collector and Hip Hop activist.  I can admit that I never knew or had every record that Paul C had touched, I have plenty of them, not all of them.  In the late 90s I had got to know Nottingham based group  the P-Brothers very well.

I was around as Ivory made his now notorious ‘Here No Evil’ CD.   He used to show me records I had missed out on, a lot of Paul C’s productions.   Prior to that I had gone to New York to start work on my film ‘The Men & Their Music’.   Chronicling the birth of New School Hip Hop, from 86 on. Interviewing Ced Gee and Moe Love they spoke highly of Paul, this was the beginning of filming a chapter on the man from Queens.

As I began editing the film the Chapter on Paul. It was so long that it manifested it self into its own film.  Learning so much more about the man, watching back the footage of CJ Moore and how heartfelt he spoke about his friend.  I felt that this was a story that needed to be shared.

As you will see there is absence of some very key people, not to say I never tried to contact them, those that know me very well can confirm I did.  My challenge was that I had made a rough of this film so many years ago, what do i do?, hold out hoping that one day they will want to tell there story which I did for nearly 7 years or drop the film?

Bear in mind Ive never been a sponsored film maker or belong to any in or popular crowds.  I was just a man with a camera traveling round filming when ever i could.  In my early days building my reputation maybe there was a miss trust from some artists, who is this guy?.  Time has showed that I kept my word and that I’m a man that prides him self on his integrity.  So I made the decision to drop the film.  Maybe those missing can see it for what it is, I can always re-edit. If anyone has photos of Paul that i can insert into the film (who would not mind)  please contact me?

I would like to thank all those that contributed footage towards the project and believed in me.  Rakim who took time out of his tour to do this.  Dr Butcher who traveled from Texas to NYC to link up with Damian Wilkes to shoot his piece.  Lindley Farley for his guidance throughout.

Another reason i never dropped the film was that there is a video that exists of Paul making beats in his studio,  but it was amongst hundreds and hundreds of video tapes in a spot in NYC, to this day it’s not been found.

I made a choice not to feature a soundtrack to the film, the audio quality of some of the footage, but mainly because this is not like one of those  movies that sensationalize and concentrate on the death and mystery behind it.  This is sincere stories from people who loved the man.  I stripped the film down to the raw footage.  Its not often you get to see such films like this about artists of this genre.  Most people will know of Rakim, but you tell me where you ever see him like this on film?

Paul C played  a huge part not just in the music but helping develop some of the groups who today are considered classic.  Mikey D, Super Lover C and Casanova Rud, Main Source, Large Pro, Organised Konfusion, Rhazel and Ultras to name a few.

In a day when music has become so disposable, bed room studios, back track listen to music produced by the likes of Paul C, there is a reason why that music is classic and never tiring, it was a made by a man that was  not a beat maker but a master of his craft.

Part 3 will be online next Sunday.

When i was last in NYC I was speaking to Finesse, and i asked him has he not jumped onto the DJ thing with the 45′s. His answer to me was ‘Nah man that not me, never was me. I love records, 45′s was Diamonds thing he’s been doing that for ever.

Personally my favorite track from the group. Reminds me back to a trip to NYC. First meeting Mikey D in Queens. Riding in his car through the borough. Talking about the past. I asked him to spit a rhyme. He still got it. I said to Mikey I’m going to make something happen.

Alongside Kevin DeCosta and K-Kut we planned to bring Mikey D over alongside the original 2 DJs from the group Main Source. We could not get the group over for family commitments. K-KUT gave me his blessings to be the groups DJ and to use the name for that tour.

The love that Mikey was met with here in the UK. Was beyond his expectations. Whilst on the tour I introduced him to Sparkii Ski who was the KOTB host on the tour. The rest is history. Mikey Returned to the USA a new man.