Every week since the official release of this lp The Power of Now we have been dropping a video. This week we are doing something special. To end the year and see in the new one. We are dropping today the Film Power of Now.

The film chonicles two Journey’s.  Diceman shares his vision, and some stories that lead up to making this album,  Pritt Kalsi’s Journey behind the scenes on how he manufactured the product as it happened.  The film also features some of the people who were also part of the journey who’s role and contribution helped make this project a very special one.  From Chris Malbon who worked on the cover art as well as Phil East a very unique character who was behind the pressing of the actual vinyl.

Chris and Pritt went to school together and from pre – hip hop and graffiti would have drawing competition against each other as small children.  Both went on to study together, Chris further pursuing his career going onto be one of the worlds leading contemporary graphic designers, working for Nike, Disney and Marvel to name a few.

Phil East i was introduced to by Kevin Da Costa also featured in the film who is probably the longest serving vinyl pressing expert in the UK.  Over 30 years experience pressing records he allowed me to come to the plant not just to film the record be made but to learn and be taught how to do it.  its people like him that we often forget. but meeting him he explained how he likes to sit with a project listen to it over and over to work out the best settings to set his machine so to give present the record and the sound at its best. This is a man who is living the dream. He lives for his job and loves it.

Kevin De Costa helped a lot behind the scenes not just playing the middle man between me and the plant but more than that he throughout the project has kept both me and Dice on track.  making sure we kept the energy at high not loosing direction. He was was the first person to acknowledge and really see what me and Dice was trying to achieve.

The film also features Dicemans uncle Sinbad, one of the first and original members of the Black Spades who’s members later went onto to birth and set the foundation of the culture we know as hip hop.  Sinbad belonged to the very first chapter and division of the Black Spades working closely to Disco King Mario. As Jazzy put it to me, these were the guys before him. The guys they took over from.  Years before i was told about Sinbad via Moe Love and Marc Davis who along side Rooney Todd suggested to me i should look for him to do an interview with him as he is one of the very important people who helped found this culture that never gets talked about.  It turns out he was Dicemans uncle.  Dice coming from the Bronx and as a child under his uncles wing would and did experience hip hop as it was being built. He was the child on the right side of the ropes at Jams getting a look at the very early DJ’s and M.Cs rocking these events.

Also featured is the group the Legion. Members Molecules and Chucky Smash get a first look at the project.  That trip to NYC was not just about me going over there to shoot the videos for the album but to present the album finished.  Unfortunately we got the press the record a week after i came back so I had to think fast and go to NYC with a mock up  getting a one off pressed.  I was able to show some of my mentors and friends the album and where i was going as far as presenting music on my label.

The film features Jazzy Jay and Moe Love who we did and evening together going through the album twice to get their feedback.  Likewise the film features the moment i presented the test pressing to Jay King who was actually the first winner of the king of the beats events who worked together with Key Figures on the skit on the exit of side A.  Andy Higgs Photographer and DJ who is part of this family was also there.

The film also features veteran giant DJ Eclipse who has been championing underground hip hop music for many years on NYC airwaves.  He managed the Legion and also has a leading role at Fat Beats.  Prior to this meeting he was kept in the dark as far this album was concerned and that this time was us revealing the project to him.  Dice had arranged a meeting with him and the group.  I was there filming the whole thing.  In the Past i have worked 2 times with Eclipse and never spoke to each other.  That was at 2 Zulu Nation Events. We literary would be on each end of speakers carrying them out together and loading up the van and never speaking.  We both had a job to do.  My memory of him and the impression those times i had with him was that he was a grafter.  He loves this hip hop thing just as i do.

But this time was the first time we had the chance to sit with each other and engage in conversation.  I chose to make him a major character in the film as offered a lot of honest great insight, advice and direction to us both.  I know that beyond the radio show for years Eclipse has been mentoring many artists. Some we know as house hold names and many who never made it. Looking through the view finder I was capturing him at work.  He wants us to succeed.  It was a real pleasure to have that expeience and share that platform.  I got learn a few things.  There i was thinking we can just role up and get onto radio, In the Uk those channels are a lot easier, as i discovered there are months of planning and programming gone ahead into putting on a radio show.

Overall I present this film, it captured a moment and i hope you will be able to see and gage the work that we put into making this record.  We are true independents.  We are the experienced underdogs.  I would like to thank my friend the original 2000. A. Dee the Artful Dodger who came over while ive been sick to help me see this film though.

Thanks to Keith, Malcolm. Tommo, Tha 4Orce, Casz, Damian, Jay, 2000 A .Dee Andy Higgs,  Jay Stephenson, Dexter and Lee Crawford who encouraged me to get this film done while i been sick

This was the last track we recorded making the album Power of Now.  I found the sample in the Diskery and wanted to use this for a skit, Once I added the James Brown interview it manifested into something else.  It is important to both me and Dice to create a music that uplifts your soul and lifts your spirits.  His voice is a powerful tool and we choose to exercise it.

Get your copy of Power of Now here.

The only guest features on this LP comes from Legion members Molecules and Chucky Smash.   produced by Key Figures this video was shot in the Bronx.

I had just come of touring with Lord Finesse and Diamond D. the chorus is my sneaky tribute to my brothers and the time we had.   One of the things we felt stong about on this LP is to put the DJ back in the spotlight.  Scratching chorus’s and outros.  Again my self and Casz went to work.   Order your copy of the LP here.

I was fast asleep when the calls and messages started to come through.  5 hours behind in NYC, special guest DJ Finesse was filling in for DJ Premier on his Live from Headcourterz show.  I dont know how he got the album but he played one of the joints we are yet to drop a video for, Iron Mic.

He cut the hell out that record.  So much so the Gangstarr producer legend Premo himself listening to the show called in to make his feelings known.  I produced this joint here in Birmingham.  Order your copy now,  this is soon to be one of those sort after lps  Iron Mic instrumental is on the 45.

Huge thanks to tha4Orce for hooking us up with the clip.  JDepina and Diceman, King of Chill, Premo, DJ Finesse, not forgetting Casz on the Cut.

The pic of Preme and Dice taken a couple of hours ago. A day after the show. 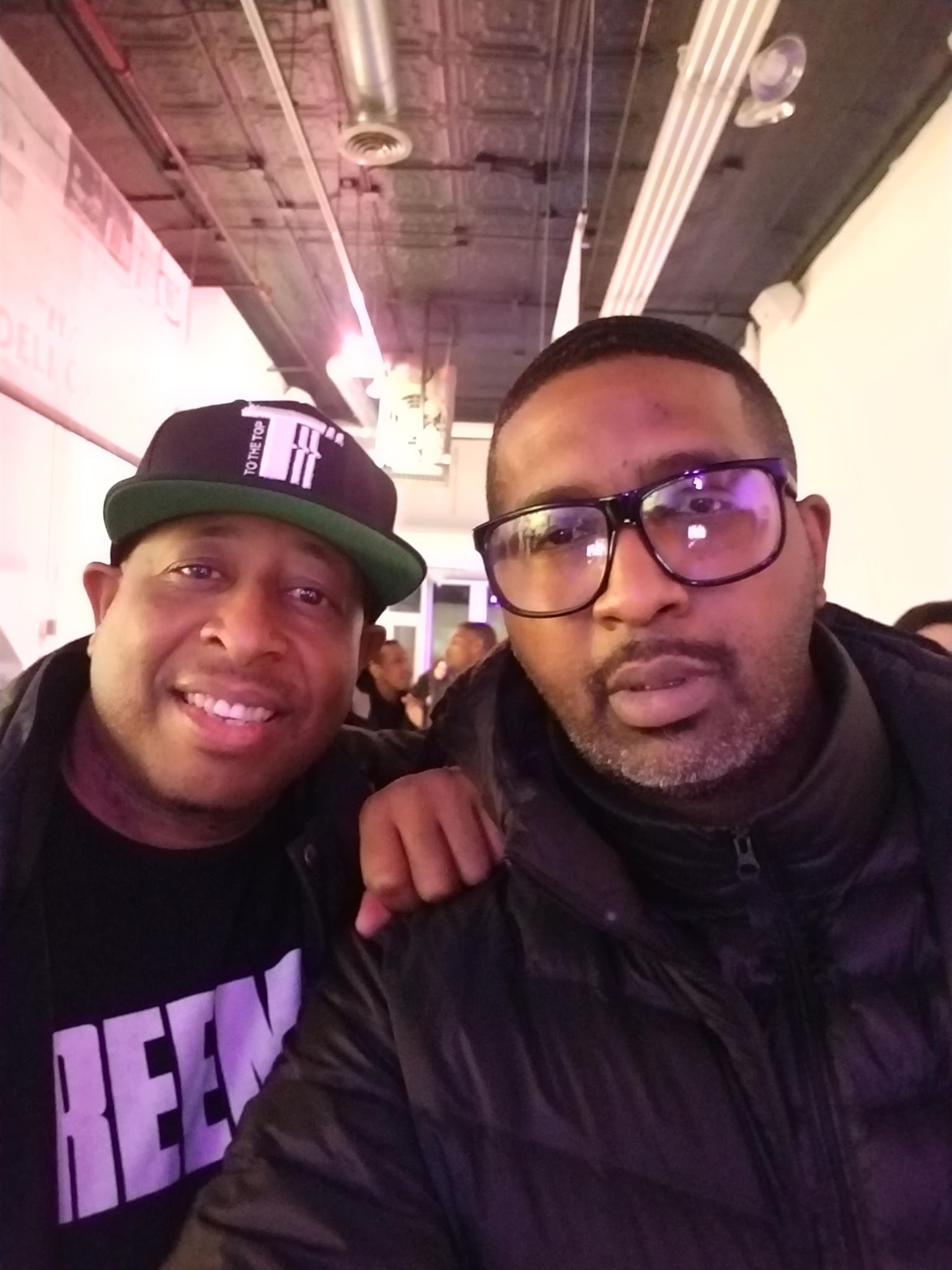 Taken from the Album POWER OF NOW, The video for the track IN HERE, Produced by J Depina.  Featuring cameos from Legion members Molecules and Chucky Smash.

We spent the day in the Bronx shooting the video for the legion Posse track.  The day was a good day, really really bright.  We certainly made use of Weshester Avenue.  We found this dinner in the morning while scouting for locations.  At the time it was a bit busy in there.  The owner had no problem us shooting in there but could we come back about 5pm when its less crowded.

The power of Now is a limited edition LP only 500 pressed. Order your copy here.  We have a delay on shipping waiting on the 45, we are looking at Dec 17th Shipping.

After speaking to the pressing plant we have arrived at a solution.  They are going to be pressing the 45 and shipping across as soon as possible.  Firstly like to thank everyone for their messages of understanding.  Richard Dron who immediately got on top of the issue.  Thank you for your support.  For those who would like to see what you are getting for your money.  the first 250 purchasers will get this package with the bonus 45.

A real independent label focused on giving you value for your money.