Veterans De La Soul drop their much talked about Dilla Mix tape.    The group who worked closely with the late beloved producer also known as Jay dee.  Altogether this is a well put together project, essential listening.  Click link for free download. 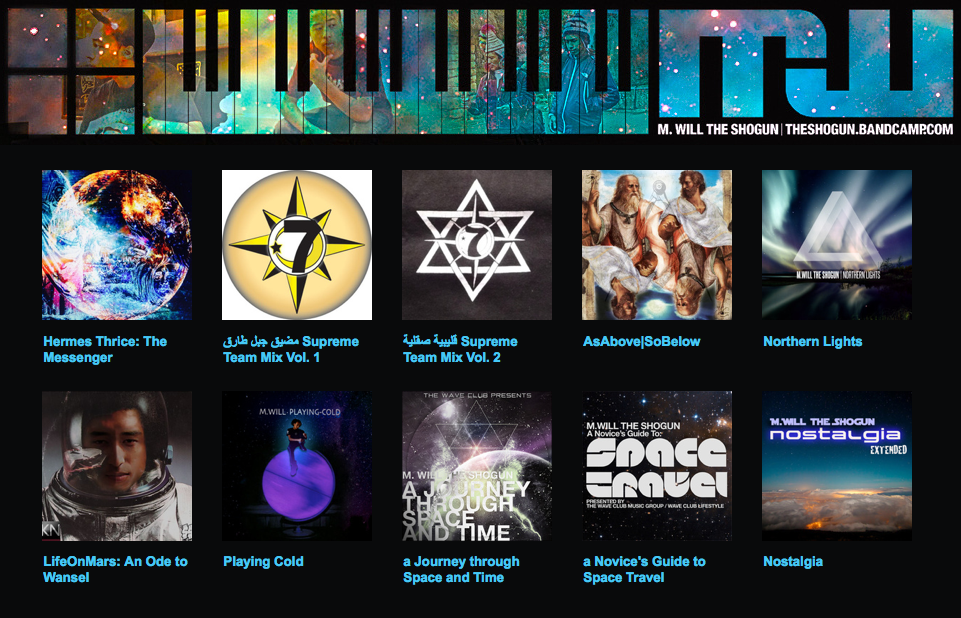 Part of the King of the Beats family.  M.Will the Shogun announced today he was giving away 10 of his albums away free.  M.Will is one of the special featured guests in the movie..King of the Beats presents ‘Looking for the Perfect Beat’.

In his own right the young producer has had a very different upbringing to most of us, brought up inside the House of Hits he was exposed to it all.  A classically trained musician, versed in newer technologies, M.Will is of his time.  Although his music may not be what most people consider traditional hip hop, it most definitely comes from there. Today he got in touch to let me know about his big album give away.  So without any question we must post this.  We must support the younger generation coming through, especially when they have shown love to us and took a genuine interest in the older generation.

“Its the first day of spring.. Summer is just around the corner! Inspired by my visit to Austin, TX for SXSW, I feel today is a great day to release my music for free for 24 hours. Normally, I price my music at unreasonable prices on my bandcamp because I feel music has an unlimited value. I prefer to personally hand my music to my fans, friends and family. However today is a special day. Updating my bandcamp I’ve realized I have released a total of 10 projects in a 5 year span (2009-2014). My 11th project will be released on my 21st birthday as a subtle ode EP to my “twin” Sun Ra who would have turned 100 on our birthday. I’ll then consider a hiatus and travel while completing my double degree in arts management and ancient history. In the meantime, as I work on finding a home for my music, I want to engage in more creative outlets to distribute my music.”

Look out for a future 45′ from M.Will on the KOTB Label..Once the film drops

Tune into the all new Mind Tha Gap show.  Tha 4orce delivers the March Edition.  The show is dedicated to the months new releases.

Today I’m proud to drop this video. My Partner in King of The Beats Records Tha 4orce, Steven Ellington had been talking to me about making a trip to the Midlands to pay me a visit.

The Plan was to watch the Edits for the Film ‘Looking for the Perfect Beat’. Discuss and plan our return trip to NYC to complete the movie. Instead we ended up shooting 3 videos.

The first was a video promo geared towards promoting his radio show. Mind Tha Gap Radio is a monthly show dedicated toward new music only. My part in the show is minimal. I helped plan and design the site .  To Motivate and be there spiritually behind the scenes.

The second is a video for the song – Good Guys Never Win taken from the Album Setting Standards the Deluxe Edition, the new vocal version produced and featuring Tha 4orce.

Shot on location in Birmingham City we started out sunrise this morning 01.03.2014 without much of a plan. The only idea we had was to make sure the main character would be walking somewhere. Unfortunately things did not work out to plan, the footage just did not come out to plan. So we went back to our old format of stand and rap infront of the camera. We shot 7 scenes returning back to Redditch to start Editing.

We put together a tidy video, but personally it lacked any spark. I felt it needed another layer and that we need to step our game up.

Thankfully Andy Higgs arrived at my place traveling 150 miles to join us on today’s project. We had a open discussion where I aired where I felt the video needed to go, and what I wanted to do. I had mentioned this to Steven earlier the day before.

Im not a fan of Pharrel Williams but I can not say that I do not really admire his work, vision on his Happy single. The video blew me away. I could see that this was going to be a big thing internet not just for its high spirited lyrics, topic and drum patterns, but the video concept. Bringing people together no matter their race, gender, sexuality, size, age or dancing ability. I could that this was going to be a internet sensation with people, groups all over the world being inspired to shoot their own versions of the song. He has lifted the spirits of the people like no president has ever done. its been a week already and look at how many global covers there are, even northen soul versions of the song.

I wanted to do my own spin on that, but unlike the videos that you see from Japan, Russia, Italy and Australia this would be like the answer record, not a diss version but the opposite to happy, Tha 4orce had written a very personal story, expressing his frustrations that many like us feel, how good guys grinding hard always seem to loose out. Hence the opposite to the Happy song by Pharrel.

Andy Higgs after watching the Pharrel Video at my house for the first time suggested that I sit in the back of his van with the doors open and shoot Steve walking around. We would get the smooth shot and maybe we will capture some magic. Steve said that we can do 2 takes, that he would rhyme ever other line and that we edit the 2 scenes together. We did one take of him rhyming the lines as we drove around Winyates shooting.

Returning to my house after 30 mins, I started to put a new video together. We got the magic, adding the element of a story or character to the video. Collectively we sat together as I edited the video. I must say Im very pleased with the outcome. Although we are based here, im very proud to have some great and creative people around me.

As I keep telling these guys at this age this is what I love to do, to be and continue being creative is something I strive and enjoy being / doing. In Rakims words..’I aint not joke’. Thank for your support enjoy our new video, directed by yours truly.